Before leaving the Campground for Rausch Saturday morning, Ken realized that his radiator might be leaking.  That ended his day for wheeling so he wisely chose to take the boys to Hershey Park instead.  Bill, Josh and TJ met Dan, Chris and Jay (he found out we were going via Eastern Hardliners Facebook page) up at Rausch Creek and got checked in.  Jay had a nice CJ that looked built to do some fairly difficult trails.  Very nice guy and cool CJ, but unfortunately, his clutch broke in the first 15 minutes of hitting the trails and Bill had to tow him out to the street where AAA could tow him home.  We hope to wheel with him again soon.For this trip, we started out with a roster of nine people. Between normal life events and some serious mechanical issues on a couple of Jeeps, we ended up with four actual wheelers. Ken, Bill, Josh and eventually TJ all convoyed together Friday night around 5:30 p.m.  Paul left about 45 minutes later. On the way up, Paul's Jeep at some point started to smoke or steam or something of the sort, so he turned back.  Bill, Josh and TJ (non-Member) camped at the Hershey/Jonestown KOA in Lebanon, PA on Friday night in their campers (https://koa.com/campgrounds/jonestown/).  Ken grabbed a hotel room at the Days Inn next door to the KOA (he was supposed to Camp in a tent, but it was poring rain and late and he had three teenage boys with him).  Dan (TaTonka on NOVAJeepers.net) a non-Member and his friend Chris stayed at a hotel in Harrisburg, PA and met us the next morning at Rausch Creek.  The KOA was pretty nice.  The bathhouse was updated and clean, they delivered firewood to your site for $6 a bundle and they had a restaurant that delivered food if desired and they had a pretty stocked general store.  Its location is right off the highway with multiple gas stations in the area making it convenient for gassing up jeeps and getting odds and ends.  For example, Bill needed a new CB cable and because there was a Love's truck stop at that exit, he was able to get a new cable on the spot.

The remaining four Jeeps started hitting the trails again.  Given that TJ and Dan are still relatively new to the wheeling aspect of Jeeps, we worked our way around the North Property and stuck to blues and hit some blacks.  we wanted to continue to teach them how to negotiate the tougher trails at a slower pace than we normally do.  We did Crawler Ridge and Trail 17 as well as the first decent black hill climb on the backside of the parking lot.  We also took every one to Crawl Daddy.  We parked TJ and Dan, very thoroughly explained the risk to their vehicles on that red trail.  They wisely decided to park and watch/photo as Josh and Bill worked their way up the trail.  No damage on that trail to the two that went up, but it was good for TJ and Dan to see it first hand and what it takes to get through it.  Josh was ready to actually do it for the first time and he did well overall despite one minor winch episode.  After Crawl Daddy was done, we went to Trail 17.  Everyone made it up fairly easily and then we worked our way back to the office as it was getting late and time to drink cold beverages around a campfire.Once back at the Campground, we grilled burgers, brats, had a good campfire and hung out.  Saturday weather was great.  Sunny and warm and perfect for wheeling and camping. 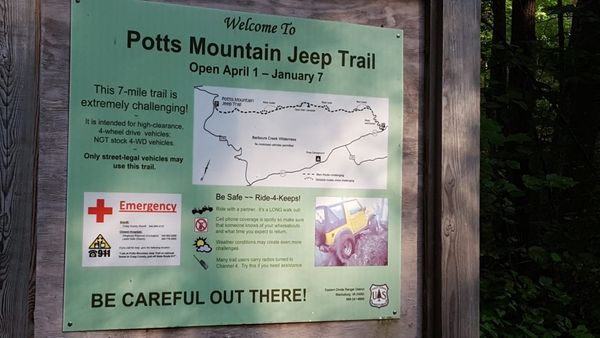 Potts Mountain Jeep trail in Craig County, Virginia is a 7 mile public OHV trail. Reportedly the toughest public trail in Virginia. The down-side of picking this date was that

A small group of Black Goats went to Burning Rock Off-Road Park in Sophia, WV for Presidents weekend, from 2/17?2/19/2019.  The Goats on this trip were