The down-side of picking this date was that it fell on the same weekend as Wheeling for Hope at Oakridge meaning that we would lose a few members who had already signed up for that event. Sadly Bunzy and Julio would miss this years Potts trip but there could be another one before the year is out.

We ended up having a decent turnout of 13 rigs with most of them being Potts Mountain virgins.

High winds Friday evening made setting up tents challenging but everyone pitched in to help get them staked down.

Despite being tied to a picnic table and weighted down with rocks, Turkeyman’s tent was blown into his fire pit. He was able to patch it with a trash bag to keep the rain out for the night.

Everyone got fires going at their camp sites and made their dinners before gathering around Turkeyman’s campfire to drink and catch up with each other while we waited on a few stragglers to show up.

We had the drivers meeting around 9-ish Saturday morning. We decided to split up into two groups (even though we knew we would all end up together at the burnt bridge section). Alec headed out with the first group of 8 Jeeps while the rest of us waited around for Turkeyman’s old wheeling buddy “Skippy” to show up.

After about 20 minutes I decided I was going to head to the trail with Billy following behind. We passed Skippy along the way so I decided to just head start up the trail since the rest of the crew would be along shortly.

Sure enough we met up with the first group at the burnt bridge. Everyone made it through without much issue except for TJ who had to be strapped. There is some debate if this was from bad spotting or because TJ should have gotten a 3.5″ lift instead of the 2.5″.

Next stop was the meadow for lunch.

After the meadow things are pretty easy going. There is one optional obstacle before getting to the “Stacks” (or “Waterfall” as some of our group calls it). Everyone made it through without issue.

Next up is the “Stacks” This can be pretty tough but I’ve only ever witnessed two people have to winch here. Even though there looks to be a bypass before the obstacle, there is not, DO NOT go off trail here or anywhere on this trail.

After this obstacle the main trail is pretty easy. There are several side obstacles to play on.

After this area there is maybe 2 miles of easy trail before getting back out to the Forest Service road.

Once back at camp it was time for dinner, drinking, and shit talking. There was some dog on dog sexual harassment and a closed can of beer thrown into the fire to finish off the night. All around great trip to Potts mountain! 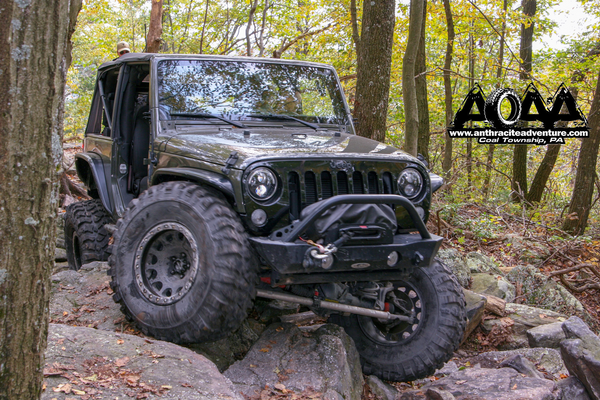 AOAA – Anthracite Offroad Adventure Area – is a reasonably new Northumberland County-owned offroad facility in Coal Township, PA.  The club had a pretty good turn out with about 12 members, 2

Before leaving the Campground for Rausch Saturday morning, Ken realized that his radiator might be leaking.  That ended his day for wheeling so he wisely chose to take the boys