Upon arrival to the park we were greeted by a parking lot attendant who provided us with information on where to park, how to proceed, and notified us that the Western property would be closing at 2 pm due to active mining. Before visiting the park for the first time you should fill out their smart waiver online although they do have ipad kiosks available in the main building should you go up there blindly like we did. Day fees are similar to Rausch creek with one exception, you are not required to pay for an additional yearly membership to use the park. AOAA has a paved parking lot as well as a larger gravel lot for parking your tow rig. There is also an air station with a monster air compressor. The main building appears to be newly constructed and you are greeted by a large LCD screen showing the weather and other information upon entering. Looking at the trail maps laid out on the table I was disappointed that the park appeared to be mainly "Green" or easy trails so the plan was to hit the handful of "Blue" and "Black" trails. AOAA seems to mainly cater to ATVs and dirt bikes rather than full-size vehicles but they are working to expand their property and make more trails for Jeeps and other full-size vehicles.

After filling out the smart waiver any paying our entry fees we headed back to our rigs to air down and disconnect. We headed to the western property since it was closing early.

Since I was eager to get on the rocks the plan was to start at the first blue trail we could find. Travelling east we hit trails 155, 160, and 161.

We were having a blast and everything was going fine until we got to the black trails at the western end of the western property by trail 217, Kutchs crack.

Last little black section we hit next to Fern Ridge on the map prior heading to the trail head before they starting mining operations at 2:30

We met up with a couple guys in the parking lot; Eddie in a TJ on 33s and Sam in a brand new JKU Rubicon Recon Edition. I asked them how their morning went and if they were enjoying the park. Sam commented that some of the green trails were "pretty rough" so I felt like I invited them to follow us for the rest of the day so Sam could see what his new wrangler was capable of. We sat through a short thunderstorm before hitting the trails again.

Headed out on the Coal Road to the Eastern reserve there was a sign that said to return to the trail head by 4:30 pm. This was a little confusing as we had been told 5:30 by the parking lot attendant and the lady when we checked in. We decided that the sign hadn't been changed from their weekday hours and we would plan to be back by 5:30.

We didn't get a lot of pictures on the second part of the day as we spent most of it moving really slow along the green trails waiting on Eddie and Sam to catch up. The plan was to make it back the black trail S.O.B. Mike and I would run the black and Eddie and Sam could run Boyscout. We found that S.O.B. starts in the middle of a very steep hill climb Blue trail and on the way up I realized that I wanted no part of the off-camber entrance with how wet the trail was after the storm that had rolled through. Mike and I made it to the top and continued around to the end of Boyscout to meet up with Eddie and Sam. Turns out the exit for Boyscout is a short black downhill that neither of them were trying.

Eddie and Sam took a right to bypass the hill and were supposed to meet up with us at the bottom. We waited for about 20 to 30 minutes and finally got them on the CB but it seemed that we would not be able to hook back up with them. Eddie was on some random blue trail and Sam was on an adjacent green, they are possibly still out there today.

Now that we were on our own it was time to hit one more Black trail before it was time to get back to the trail head. Bee line looked like a good candidate but with only an hour an a half left I was worried we wouldn't have enough time. I decided we would do L.A. since from where we were we would be heading downhill making for an easier time getting through the trail.

L.A. was a pretty cool trail. We took mostly video on this one, not many photos (I am working on editing the vids but I am an editing noob so it may be a while). As I mentioned earlier, we were heading downhill. I didn't have that bad of a time since I am running 37s and lockers but since I was trying to set Mike up for good photo ops I was throwing caution to the wind with my spotting. I led Mike into a few bad lines and got him stuck two or three times. on the last obstacle he was stuck between a rock and tree with maybe 6 inches to spare, not a good situation as he need to be winched from behind and I was in front of him. I found a way around him but it was pretty off-camber and I would need to do a 20 point turn, which as you may know is not my favorite thing to do so I was being a little bitch about it. To summarize; set up on a bad angle, almost flopped him, manned up and re-positioned, had to anchor my rig to a tree, and finally freed him.

Mike and I were off the trail about 5 pm and hauled ass back to the trail head. When we finally made it back to the parking lot we were the last two vehicles there and they were closing up shop, I was a little worried that 4:30 was indeed the time to be off the trail. Airing up the tires, my second Harbor Freight air compressor bit the dust so I decided that I would just get air at the 1st gas station I could find. While waiting a Mike to head finish airing and connecting his swaybars one of the trail rangers drove by in a skid loader and pointed out the air station that was right in front of us...doh! I aired up quickly and headed inside to check us out. Inside I shot the shit with Dave (Trail Ranger) about our day and made sure they weren't pissed that we came in so late. Dave said it wasn't a problem at all. He asked if we were the ones who had called into the office reporting they were lost out there (Possibly Eddie and Sam?) which of course we were not, I don't get lost. Dave told me about their plans to acquire more property and open more trails for full-size vehicles. He also told me fun story about an event they held in the snow this past winter where he had to rescue a JKUR owner with his unlocked, AT tire equipped TJ...still not sure if he was insinuating I was a noob since I drive a JKUR.

I will definitely go back to AOAA and hit the rest of the trails we weren't able to get to on this trip. 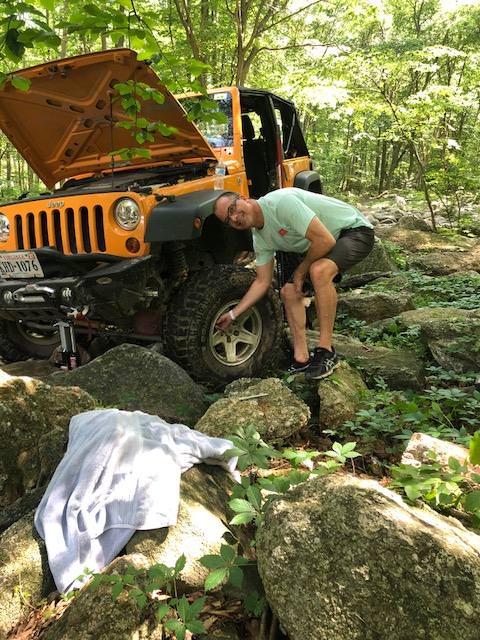 On Saturday, June 30th, a small group of goats made the quick trip up to Pine Grove PA for a little wheeling at Rausch Creek. The day started bright and